Through these programs, and through initiatives that help address social determinants, fight opioid abuse, address childhood obesity, and care for children with special health needs, Safety Net Health Plans provide health coverage that helps their members lead healthy, productive lives. Following are just a few of their stories that shows why coverage matters.

“The medication without insurance was $150 – 160 a month. That’s a huge chuck of change right off the bat. [Coverage] means just not having to worry every three or four weeks about where you’re going to find 150 bucks. It’s really a load off my mind.”

Lenora: Coverage Helped Her Prepare for the Workforce
(video) After the Affordable Care Act passed, millions of Americans had access to health insurance for the first time. One CareSource member, Lenora, knew that she needed to sign up for coverage to avoid the tax penalty. While signing up in 2014, she learned that she was eligible for Medicaid and enrolled in CareSource. About a year later, CareSource launched Life Services, a program that offers services and support that paves the way from where members are to where they want to be. We met a determined Lenora at one of our first events. That moment was the beginning of a complete change in her life, but it never would have happened without the ACA. Here’s her story.

Two years ago, “Ken’s” life forever changed when he became disabled. Unable to work and ineligible for Medicaid in his home state of Kentucky until the 2014 Medicaid expansion under the Affordable Care Act (ACA), Ken was forced to make the difficult decision to forego many then-unaffordable medical treatments and medications.

Soon after he qualified for Medicaid through expansion, he joined Passport Health Plan. One of the plan’s embedded case managers transferred Ken’s case to case manager Marsha Busey. Marsha immediately observed his inability to afford a needed $10 over-the-counter (OTC) medication his PCP had prescribed. After numerous conversations with Ken’s pharmacy, prescriber, and Passport’s pharmacy department, Marsha was able to connect the pharmacy and prescriber so they could provide Ken with the prescription. She also forwarded Passport’s OTC medication formulations and educated the PCP on how to prescribe OTCs for our members.

Today, Ken attends physical rehabilitation and has obtained medications that were not affordable before. He states that he is so thankful to have health insurance. Kelli grew up in a family struggling with abuse and addiction. She credits the 12 Weeks to a Healthier New You program offered through Jackson Care Connect and Rogue Community Health Center in Jackson County, Oregon, with changing her life.

The post-traumatic effects of her childhood brought Kelli to 285 pounds – leading to other health problems including asthma, high blood pressure, heart failure, depression, nerve damage, and a total of 20 metabolic diseases.

“When I became disabled, when I wasn’t able to do anything, I became depressed,” said Kelli. “I just kind of shut myself down.”

Her doctor recommended Jackson Care Connect’s 12 Weeks to a Healthier New You program at her local YMCA, at which point Kelli’s life changed. Beginning with training in healthy eating, she learned how to read food labels and recognize what was good for her body and what wasn’t. The program included a personal trainer and exercise programs that took into account her gradually improving health.

Community health worker Linda Larson from Rouge Community Health Center, part of the Jackson Care Connect provider network, was a vital part of Kelli’s recovery. “She would go every Wednesday, and she would sit on the bench and document [what I was doing],” said Kelli. “And she was a real good support person.” Kelli also credits her primary care physician, Dr. Thomas Clark, as an important part of her health team.

According to Kelli, she made these life-style changes to stop the cycle of loss in her family. She lost her parents, grandparents, aunts and uncles young, in part, she believes because of their lifestyle choices. She didn’t want her children to face that same pain.

The Healthier New You program had a domino effect. “When the first 40 pounds came off, my asthma started getting better,” said Kelli. “I was no longer on insulin. I was no longer on the Glucophage for my diabetic meds. That was pretty awesome, so I know I was doing something good.”

Ultimately, she lost 115 pounds and her son joined her in the Healthier New You program. Through the program, he lost close to 40 pounds, gained strength, and ultimately became an athlete. Because you need to do well in school to participate in his sport, he also focuses on being a successful student.

With help from Jackson Care Connect’s health and wellness programs, Kelli and Carlos are stopping the cycle of poor health and depression that stem from a family history of trauma. “I’m living proof that they work,” said Kelli.

Fifty-four-year-old Jon has a poster of Muhammed Ali in his apartment. “Impossible is nothing,” it reads, next to an image of the gloved boxer — his mouth open in a triumphant roar. Jon’s had that poster since 2000. Its words are his motto. He’s looked at them time and again, even as he’s dodged one curveball after another.

Jon is a recovering alcoholic with depression and bipolar disorder.

In 2011 and 2012, Jon experienced homelessness for 13 months. Then the owners of a car wash offered Jon a job and a place to stay — in the side room of their carwash. They paid him $25 per day under the table. 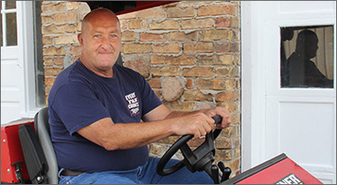 At first, Jon was grateful. Eventually, he realized that they were taking advantage of him. He also realized that he didn’t know where else to go or what else to do.

Overwhelmed with hopelessness, Jon could not envision a life worth living. On February 6, 2013, he experienced intense suicidal urges. But “Suddenly, it was like a flash,” Jon said. In his head he heard these words: “Don’t do it. Get help.”

Jon called the Nancy Page Crisis Residence. They sent a cab to pick him up.

Over the next week, Jon experienced intense flashes of heat and cold. The detox symptoms became so debilitating that staff sent him to Hennepin County Medical Center. When he was released a few days later, Jon stopped by the same pub on the way back to Nancy Page and drank eight more screwdrivers.

“When I came back intoxicated, the staff chewed me out,” Jon recalls, but that was the turning point. “I’m just killing myself,” he realized. After that, he resolved to “stay put” and let the experts dictate his next step — a 90-day stay at the Huss Center for Recovery.

After his stay at Huss, Jon lived at Mission Lodge, a residential center in Plymouth for men and women with chronic chemical dependency.

While at Mission Lodge, Jon spoke of his desire to get his own apartment, finish high school, get his driver’s license reinstated, and find a job. He was also interested in becoming a certified peer specialist, and reuniting with his three adult children who he hadn’t seen or spoken to in several years.

In 2015, Jon was offered an apartment at Hamilton Manor, a Minneapolis Public Housing Authority residence in north Minneapolis. When his certified peer specialist from People Inc., took him to visit, Jon was awestruck. “[I thought] oh my God, I’ve never had a place like this,” he recalls. He moved in on January 25.

Soon, Jon reunited with his three children. His daughter was the first to see his apartment.

Jon also began visiting his mother and other relatives in and around Minneapolis. He helps them with housework, like mowing. Both of Jon’s uncles have had strokes and are appreciative of the assistance.

Reconnecting with family has been phenomenal. “The whole time I was out there [at Mission Lodge] I wanted my family,” Jon said. But, “It was something I thought I’d never get back.”

This year, Jon also began speaking to residents at the Huss Center for Recovery. He usually speaks three times per month for one hour each time, to groups of 15 to 25 residents. “I get their attention really fast,” Jon said, of his presentations. “I take pictures of the cars I banged up [while intoxicated] … I bring my criminal record and pass that around in the group … I’m like a big brother [to them.]” Jon’s overriding message: “You just don’t give up.”

Jon also attends support groups himself — a Mental Illness Chemical Dependency group on Mondays, and an Illness Management and Recovery group on Fridays.

Since February 2013, Jon has revisited the site where he contemplated suicide. He finds the area “peaceful.” Yet, he also thinks, “How dumb of me. But I didn’t know at the time that I had anything worth living for.”